Serene Richards’ review of Person and Things by Roberto Esposito 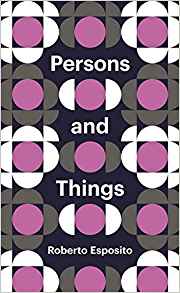 Roberto Esposito
Person and Things: From the Body’s Point of View

The Italian philosopher Roberto Esposito is well known for his work on the notion of immunity and its constitutive relation to community. Esposito situates himself as a proponent of a so-called affirmative biopolitics, thus departing from biopolitics in the sense that either Foucault or Agamben have articulated. For Esposito, a so-called affirmative biopolitics is possible if one reverses the capture of life that biopolitics entails, instead re-fashioning the notion as a ‘biopolitics of life,’ with the aim of apparently reversing the thanatopolitical potential of the categories of life, body, and birth. In Persons and Things, Esposito seeks to show how the body, as neither a person nor a thing, is an impersonal category capable of dissolving the binary dichotomy of persons and things.

Here, Esposito continues his previous work on the dispositif of the person and the idea of the impersonal, notably from Third Person: Politics of Life and Philosophy of the Impersonal (2012). For Esposito, the notion of the person – as a legal-philosophical figure – is a key dispositif, or apparatus, through which Western thought has sought to regulate the improper from the proper, the body from the soul. In Classical thought, the person, characterised and distinguished by the soul (or rationality contra animality), has the power to consign the body to the level of the thing. Indeed, this was the case with slaves; for Aristotle, the slave, while being human, is akin to equipment or practical instrument (Agamben, 2015). Esposito calls for an impersonal thought with the potential to rethink notions of the public and the common.

In Persons and Things, Esposito aims to unravel the metaphysical bind between thing and person from the perspective of the body. Since “the human body does not coincide with the person or the thing, it opens up a perspective that is external to the fracture that one projects on the other” (10). Esposito calls on numerous examples from legal history and Western philosophy as evidence for this separation and exploitation of the thing by the person. Familiar themes are addressed, from the dominance of the mind over the body, to the subordination of animality in relation to rationality. The book is neatly organised into three separate chapters, titled ‘Persons’, ‘Things’, and ‘Bodies’.

Esposito begins by showing how Roman law took as its subject matter persons, things, and actions, thereby codifying the categories and distinctions that had hitherto been widely accepted in Roman societies. For Esposito, this codification would become the presupposition of all types of thought, including philosophy, politics, and economics. The human being, in other words, is presented as divided, where the division between person and thing in the human being is continually articulated and re-articulated anew. This entails that one can either be a person or thing, and an irreconcilable gap is thought to exist between the two. Esposito shows that in the Roman legal tradition the definition of the person is constituted negatively, inasmuch as “a thing is a non-person and a person is a non-thing” (17). Their relationship thus becomes one of proprietary domination, where the thing is thought to belong to the person. Personhood is acquired on the basis of ownership or possession of things, and having mastery over them. Claiming ownership over things extended to human beings themselves. In Ancient Rome, human beings were distinguished between free persons and slaves. Slaves “thus had a dual status – as persons, to which they belonged on the abstract plane of denominations, and as things, into which they were in actuality assimilated” (26). Importantly, it was not the case that a free person would remain as such throughout his or her lifetime: instead, everyone seemed to adopt the condition of a possessed thing at one point or another (29). This highlights the fact that persona, as such, did not refer to an individual per se, but rather more precisely constituted a legal status (30). In effect, the person, as an abstract legal category, is not what one is, but what one owns or possesses.

This element of ‘abstraction’ is an important aspect of Esposito’s work, both generally and in this particular context. This means that in his view, if we are to “understand the legal world established in Ancient Rome – spreading from there throughout the West – we cannot overlook this peculiar connection between realism and metaphysics, concreteness and abstraction” (67). Res, or the thing, is at the same time both the object of a particular legal dispute and the ‘cause’ of the disputation itself. In this sense, what is important about the thing is not necessarily its material fact or concreteness, but rather the structure into which the thing is brought into being, and which at the same time helps to create it. The law, in other words, de-substantialises the content of the thing, and transforms it into a general rule or principle.

This de-realisation of the thing is a familiar notion in philosophical reflections on capitalism, and in particular on the distinction between use-value and exchange-value. For Esposito, the notion of ‘value’ has been secularised and given a primarily economic dimension. In “the modern world’, he claims, “things are annihilated by their own value” (81): we are incapable of thinking of use other than in its economic determination, therefore losing any sense of a thing’s intrinsic qualities. Marx reconstructs this process of exploitation and shows its effect on the whole of society (82). Things reduced to commodities thus have both a use value and an exchange value. Following Marx, Esposito shows how the ‘use value’ of the thing is transformed once on the market: “it is changed into something transcendent,” as Marx formulates it in Volume I of Capital (82). What is perceived to be an intrinsic connection between the thing and its value is in reality a system of belief, such that: “what appear to be things are nothing but the reversed outcome of relationships between people. Money, having become capital, constitutes their eminent expression – as pure exchange value, it is regarded as the most valuable thing to possess.” (83) In this sense, Esposito shows that things become capable of their own autonomy, and endowed with a life of their own. At the same time, the inverse is also true, as people are turned into things (one might think here, for instance, of Marx’s ‘personified labour-time’).

Esposito concludes his analysis with a reflection on the body. The body, he notes, is generally ignored by the law, given the latter’s focus on persons and things. The body, being neither a person nor a thing, is nonetheless usually thought of under the category of the person. Insofar as philosophy is concerned, the body is given a subordinate position, often as an external object. According to Descartes, for example, “not only is the mind not coextensive with the body, in order to recognise itself in its own essential principle, the mind must make itself autonomous from the body” (109). Esposito shows that the alternative paradigm is one proposed by Spinoza, where it is inconceivable to think of ‘mind’ as such without the body: “corporeality,” he writes, “for Spinoza, is the origin of knowledge, the vehicle of experience, the fount of wonder.” (111). In seeking to transform the relation between person and things from the body’s point of view, Esposito points to the development of biotechnologies that have transformed conceptual understandings of the body in law, philosophy and politics. For Esposito, this requires a radical reconfiguration of the relation between the human and technique, generally following Simondon’s thesis on technical objects, with the body seen as the key mediator (134).

Politics, for its part, has always included the body in some way, in the form of the ‘body politic’, for instance. Esposito shows that in the era of biopolitics, a politics of life is one “that always comes as a reaction to a politics focused on life” (143). Following Foucault, Esposito argues that the human body thus finds itself at the heart of this problem, both as object of exploitation and of resistance. In this sense, Esposito follows Butler’s assertion that in order for a politics to exist, not only are public spaces necessary, but they must equally “be filled by living bodies united by the same demands” (147).

Overall, Persons and Things is a systematic text that neatly problematises a number of contentious issues of our contemporary politics. Given the challenges of financialisation, biogenetics, platform capitalism, automation, and ecology Esposito is right to call for a rethinking of our relations with things. Although the reader is not given a clear indication of Esposito’s precise contribution to the field, the breadth of material covered, along with the variety of theorists engaged with, certainly make for an interesting read.